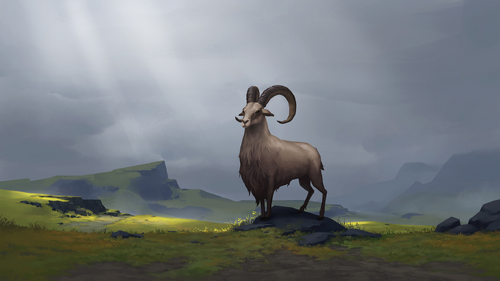 The Clan of the Goat. When it comes to surviving in the dangerous conditions and building sturdy settlements, the Clan of the Goat has no rival. They will endure the harshest of winters and even prosper. Self-sufficient survivalists, they work hard to make the most of every inch of their territory. Adaptable and resilient, they will be right at home on Northgard.

The biggest advantage lies in the unrivaled ability to prosper with only little space available. Enhancing any areas with cheap extra building space and buildings that are able to occupy an extra worker can create by far the strongest economy among all the clans. Further enhanced by the option to trade away excess

Your Defense Towers and all your

Military units gain 20% resistance when feasting.
You gain one free Feast per year.

Your Woodcutters will produce 20% more

Iron, and forging time for those tools is divided by 2.

Upgraded Food-producing buildings can be assigned an additional

Increases your civilians' resistance by 20% per building in the area.

Kröwns income by 50% and by 70% on tiles with a natural food source.

Gefjun's Jar : Allows you to spend

Food to summon new Villagers or Sheep and build another Sheepfold. Required

Happiness for your population is reduced by 10%.

In the story campaign, Heidrun clan are led by an elderly bannerman named Halvard. A wise and kind-hearted man, he focused on the survival of his people. He abhors senseless violence, but not against resorting to it when provoked. He seemed to be knowledgeable, as he familiar with mystical creatures he and his allies encountered at Northgard which mostly believed to be either myth or rare.