Conquest refers to the third post-release major update which introduced a stand-alone new game mode alongside new content and balancing. It was released on 2019-10-22. Patch notes can be found here.

Conquests are a succession of custom games ("battles") against AI opponents on specific maps where unique game rules and/or victory condition have been set. It can be played on four difficulties to challenge every type of player : Easy, Normal, Hard, and Extreme. 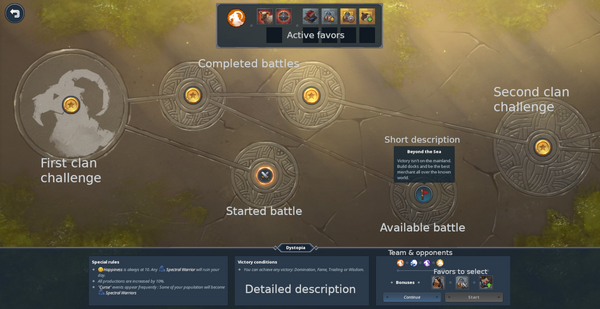 Each clan is set with its own specific conquest. To progress through a conquest, one will have to resolve :

While order of the challenges are constant, intermediary battle are random, making each conquest attempt unique. Additionally, each battle allows the player to choose and unlock random bonuses ("favor") that will last throughout the conquest.

General bonus are randomly chosen from this pool. You can select stronger bonus as you progress through the conquest (after passing the second clan challenge).

defense and his recruitment cost is reduced by 20%.

Happiness provided by your military units is increased by 100%.

Food Silos are free, use no building slot and improve

Sheep instead of one.

Barricades, it grants +100% bonus on defense.

Feasts last two month instead of one.

Menders produces +50% more. Their tool costs no resources and forge time is divided by 2.

Whenever upgrading your townhall, you gain three free building upgrade.

Mercenary raid, it is doubled.

+1 Dragon Essence for each sacrifice.

Warchiefs regenerate in your territory.

+10% bonus production in zones with a

Great Tower is destroyed, it kills all units in the territory.

You can control one more

Enemy units in your coastal territory lose life over time.

Destroying your buildings earns you back their building cost. Likewise destroying enemy ones using Ram ability.

Torfin can summon his own shadow to follow him everywhere.

Conquest allows for co-op experience in P2P or on the game's servers, which is roughly the same as solo, but with doubled opponents.

Co-op and solo mode are distinctive and cannot be switched from one to another.
At the beginning of a new conquest, one player stands as the host of the game (conquest will be based on their clan) while the other has the possibility to choose any clan to support them through the conquest. Both players choose a clan at the beginning of the conquest, and that choice cannot be changed until it's over. Both players will benefit from their own clans' favors.

Conquest comes with a new set of custom townhall skins. They can be unlocked for any game mode by finishing the clan's conquest on any difficulty. (It needs then to be activated in the preference settings). If the conquest is played cooperatively, each player will unlock the skin for the clan they played as through the conquest.