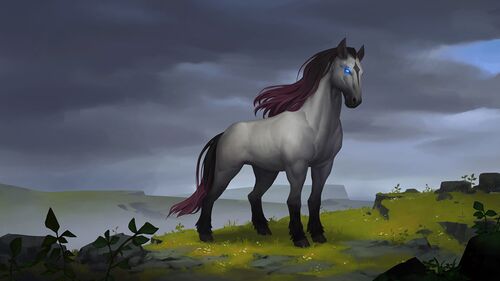 Led by Brok and Eitria, two spirited siblings, the Clan of the Horse are a quiet and sturdy people. They are also recognized by all as the best craftsmen and women of the known world.

The clan strength resides in its versatility, with heavy focus on mining and

Brok are at the center of the clan mechanics, mainly because they are the only ones able to mine

Forge Tools and Relics. Through excavation, they achieve fast progression through the

lore tree which ease their clan's development in the best suited direction. The ability to build a second relic widen those possibilities even more.

and trading partner gets twice the amount of those resources

You can build a second Relic
2

deposits spawns randomly in your territory. All deposits accumulate 20

Relics don't use a building slot. Zones with or adjacent to an active relic gain +5% production.

Warchiefs' mining and forging speed is increased by 60%.

Happiness per territory with upgraded civilian buildings (except houses).

The Horse clan has its own Relic, the two swords Dainsleif & Tyrfing.

This Relic gives your warchiefs, Eitria and Brok +20%